This project started as a part of "Japan Brand Development Project" supported by Japanese Ministry of Economy, Trade and Industry in 2017. 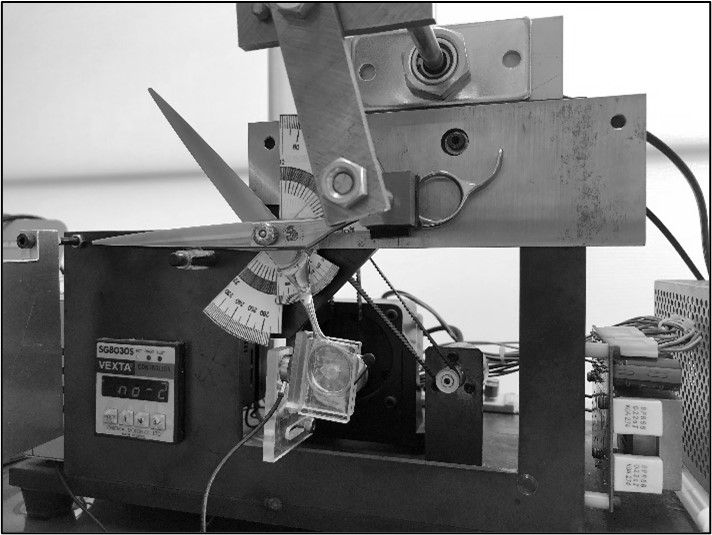 HSC is working on standardizing quality of hairdressing scissors, and some of the research results were lectured in “the 71st Joint Lecture on Technology of Plasticity”* which was held on the WEB from November 14, 2020. The outline of the lecture contents is explained below.

HSC will continue to work on standardizing quality of scissors based on science, so that users can purchase and use scissors without worry.

-Evaluation for Compatibility of Blades-

At present, there is no globally unified standard for quality of hairdressing scissors. The main reason for this is that elucidation of the cutting mechanism has not progressed. Specifically,


For changing this situation, we set up Hairdressing Scissors Consortium (HSC) last year. We aim to create environment that hairstylists can choose scissors based on scientific evidence.

Fig. 1 is picture of testing machine. This machine consists of air cylinder for clamping scissors, motor for rotating, load cell for measuring force to push up, and rotary encoder for measuring rotation angle. Closing load measured by load cell is transferred to data logger through strain amplifier. Recorded data can be analyzed by PC.

2.1 Evaluation of magnitude of variance

Because hairdressing scissors are finished by hand, variance of quality is large. Therefore, we measured variance at first. We prepared five samples of same model. At first, we choose one sample and put on the testing machine. We measured necessary force for rotating a blade when screw of scissors is totally tightened, and confirmed approximately 0.34N is necessary.

We measured closing load five times repeatedly (Test1). Next, we measured five times again by using same samples but scissors are put off from testing machine each time to understand variance effected from clamp (Test2). And finally, we adjusted to make maximum closing load without cutting 0.49N, and measures five samples, one time for each (Test3). The data when output voltage of the encoder changes (every 0.52 deg) was extracted, and the average of 5 times was obtained. The variance for each measurement was calculated and compared. The results are shown in Fig. 2. 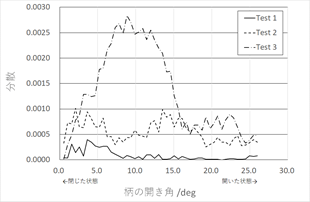 Fig.2 Variance of each test

In Fig.2, the angle of aperture is the opening angle of handle centered on the screw of scissors. Data of Test1 is variance of testing machine. Data of Test2 is variance due to state of clamp in addition to variance of testing machine. Data of Test3 is the result of adding variance between samples. In this test, maximum value is 0.0028 in Test3, which is approximately 5.5% when calculated back to the load. The amount of variance between samples can be used as an indicator of the skill level of craftsmen who made the scissors. Therefore, we measured 5 scissors made by a foreign manufacturer Company X under the same conditions as Test3. The results are shown in Table2.

From the results, we found that the scissors made by Company X had larger variance in the empty cutting load than our products. Although the above is one of examples, we found that quality of scissors can be evaluated by comparing variance.

Compatibility of scissors is determined by clearance shape formed by the two opposing blades. Image of the “clearance” is shown in Fig. 3.

（2）Bad example (Clearance does not draw one arc)

In Fig. 3 (2), the scissors cannot cut object properly because clearance is not made up of one arc. Also, even if it is made of one arc, the scissors cannot cut object properly if clearance is too wide or too narrow.3) This time, we verified whether it is possible to judge quality of this clearance from the empty cutting load. We prepared two samples each of four types of clearance, wide, narrow, middle between wide and narrow, and waved. Fig.4 shows the results of measuring shape of the samples with a three-dimensional measuring machine. 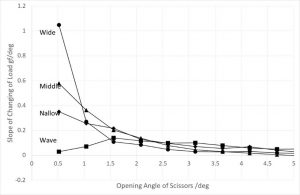 The results are shown in Fig. 5. From the results, we confirmed that the load change felt by the hand could be grasped by the experimental device. 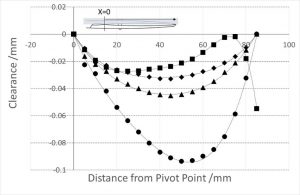 In addition, seven inspectors judged whether the samples used this time could pass the actual inspection. However, the sample with waved clearance was excluded from the sensory test because it could not pass the test for cutting the test material other than the normal clearance inspection. The results are shown in Fig. 6. 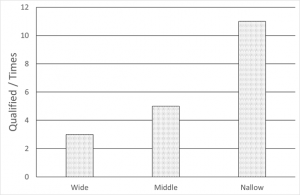 We verified possibility of quality evaluation of scissors by measuring the empty cutting load of scissors, and found the following.

1)Kenji Inoue: The proceedings of the 2004 Japanese spring conference for the technology of plasticity, 2004, 195